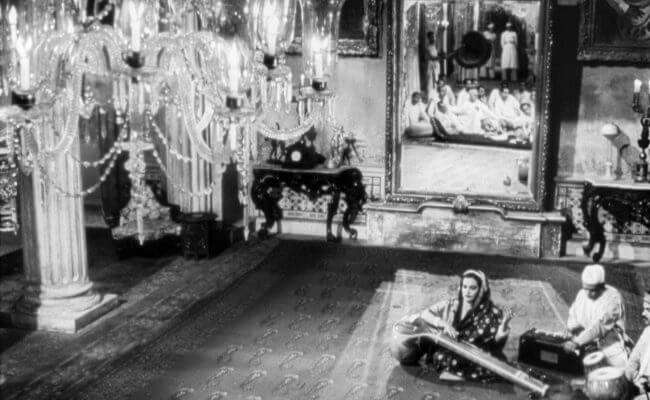 ‘A remarkable experience.’ Time Out

Produced between the final two parts of Satyajit Ray’s celebrated Apu trilogy, The Music Room depicts a changing India, its society in flux with long-held privilege in decline and threatened by new wealth.

Set in the late ’20s, it follows decadent Bengali zamindar (landlord) Biswambhar Roy (the beloved Chabi Biswas), an otherworldly man who prefers spending time listening to music and dreaming of the past. His greatest joy is the music room in his now dilapidated mansion, a shadow of its former self.

Brilliantly evoking the crumbling opulence of Roy’s former world, Ray sets up incandescent depiction of the clash between tradition and modernity, and a ravishing showcase for some of the most popular Indian musicians of the day.

A defining work by Ray and perhaps his most evocative film, it is magnificently beautiful and filled with observant detail: an insect in a glass, the bliss of an elephant bathing in the river and  the joy of the servants reopening the dusty music room.

‘An exceedingly simple, moving film, expressing a human dilemma that should be comprehensible to all.’ New York Times

This website uses cookies to improve your experience while you navigate through the website. Out of these, the cookies that are categorized as necessary are stored on your browser as they are essential for the working of basic functionalities of the website. We also use third-party cookies that help us analyze and understand how you use this website. These cookies will be stored in your browser only with your consent. You also have the option to opt-out of these cookies. But opting out of some of these cookies may affect your browsing experience.
Necessary Always Enabled
Necessary cookies are absolutely essential for the website to function properly. This category only includes cookies that ensures basic functionalities and security features of the website. These cookies do not store any personal information.
Non-necessary
Any cookies that may not be particularly necessary for the website to function and is used specifically to collect user personal data via analytics, ads, other embedded contents are termed as non-necessary cookies. It is mandatory to procure user consent prior to running these cookies on your website.
SAVE & ACCEPT